Big Bear Resort began in 1948 when a school teacher from Louisville, KY, took a drive around the newly formed Kentucky Lake. William and Louella McFarland came upon this perfect place and decided, right then and there, that they wanted to open a fishing camp. It wasn’t something they planned to do; it was just something that presented itself.

At the time the area was pretty much wilderness. Mrs. MacFarland was scared because she claimed you could hear big cats screaming at night. She didn’t know if there were Mountain Lions roaming the area or if it was wild cats but she had a great fear of them. At night some of the cabin guests would need more kerosene for their cottages and she would have to go out back and fill up their cans. The kerosene was kept out back in a 55 gallon drum on a platform. She was always certain one of those big cats was going to be sitting on top of that drum of kerosene waiting for her! She told a friend that she had to control herself until she got the kerosene and then run back to the house. At first none of the buildings had foundations. Each unit was set up in the air on concrete blocks. Air conditioning meant you propped open the shutters with a stick. Heat was kept in by closing them. Mr. Mac and some of his neighbors had gone coon hunting one night and the dogs chased the coon back to the Mac’s house. Mrs. Mac said you had not lived until you wake up with one terrified coon hissing and pack of coon hounds baying under your house.

Being that far out of town and with transportation and roads not what they are today, the town sheriff made Mr. Mac a deputy, just in case he had any problems with a customer. This way, he could “legally” take care of the guests.

Mr. Mac had an old guide that worked at the lake who had lived here long before there was a lake. Actually, the lake was so new that most everyone around had lived here before there had been a lake. The old guide would take fishermen out and knew where to get the fish. In the spring or fall when the birds were migrating, he and Mr. Mac would get in a boat and go goose or duck hunting. Mind you, this was before fish and wildlife agencies existed. He said the old guide had an old gun and he would shoot until the barrel got too hot to touch so he would dunk it in the lake to cool it off, then bring it out and shoot some more. He said it was quite funny to see that old man leaning over the side of the boat, holding his gun in the water and steam coming up. It had a certain smell to it …the combination of lake water and gun powder. Big Bear Resort had its humble beginnings as a fisherman’s campground in 1948. Located in the Big Bear Embayment of Kentucky Lake, at the point of Malcom and Bear Creek, Big Bear Resort has provided anglers with one of the best points on the lake for fishing. Owned and operated by Rick and Janet (Caldemeyer) Meier since 1971, the resort embodies an old-fashion family vacation with modern amenities. Many memories of tackle-bearing anglers stepping up to the old marina and bait shop to rent one of the jon boats, which were put out each morning, still reside in the minds of those who share their fond fishing experiences at Big Bear with their grandchildren.

The addition of rustic fishing cottages throughout the years and the remodeling of an original 1802 log cabin during the 1950’s began a lodging tradition of Kentucky hospitality and service, an enduring signature for Kentucky Lake vacationers.

Many remember fun-filled vacations as children at Big Bear: fishing, swimming, camping and outdoor fun and more! They remember the rolling woodlands in which they camped; the restaurant once located next to the office, in which they dined; and, of course, the countless tales of the ‘Big One’ which sometimes didn’t get away.

Now, upon bringing their own children to Big Bear, much has changed and much has remained the same. Your hosts, the Meiers, continually strive for excellence in your vacation experience. Today the 52 acres of woodland lakefront splendor feature the best and modern conveniences on the lake; such as, cottages, townhomes, condos and villas. Big Bear Marina provides boat rentals, guide services, bait, tackle, gas, snacks, ice and gifts.

We would like to thank all of our guests for all the wonderful years you have given us at Big Bear and warmly welcome our new quests. The Log Cabin was originally owned by Rosabell and Tom Threlkeld of Paducah, KY. Mr. Threlkeld was an attorney and was paid with the Log Cabin after representing a bootlegger. When William and Louella McFarland bought Big Bear they let the Threlkeld’s put the Log Cabin on the property. The McFarland’s sold the resort in the early ’50’s, along with the cabin, and the Housers used the Log Cabin as their summer headquarters during the the Big Bear Camp days. 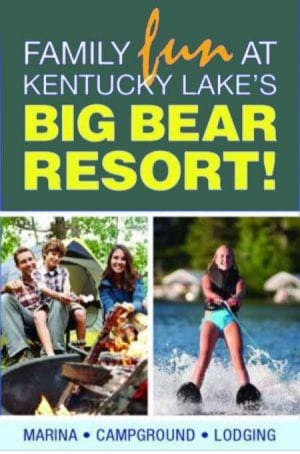